You know, I never really liked making Halloween costumes!  I much preferred making “real” clothes.  But when one is a parent and sews, I guess costumes are just part of the deal.  Here is one year’s costume for Annie.

David, of course, was just wearing purchased jack-o-lantern jammies.  But I turned Annie into a flower!  This was from a pattern from one of the Big 4 pattern companies.  The green “stem and leaves” fastened in back, and the sleeves had sort of quilted spines.  The “blossom” was layered with batting and had boning stays to support the flower, and was stitched to a cap that tied under the chin.  She and her friends used this flower costume for dress-up for many years!

And then, of course, princesses are always popular!  Sewing with cheap woven lame is not so popular!

The bodice was some kind of satin, and the pattern was probably just a basic yoke dress.  The scepter, of course, makes it royal! 🙂

I made a special quilted wall-hanging for both of my children when they celebrated their twenty-first birthdays.  Because Annie had received one almost four years earlier, David knew that I would be making one for him as well.  But, of course, he didn’t know what it would look like.

David was a smart, creative, loyal, and loving young man who had some deep hurts and conflicts inside him.  He had struggled with addictions for several years by then, but at the time, he was winning the battle and doing well.  So I wanted to make him a phoenix, the bird which perishes in the flames, then rises triumphant out of the ashes.  I do many things well, but drawing isn’t one of them!  I searched for an image of a phoenix that I could re-create with cloth, and found a wonderful painting by Marina Petro, who kindly gave me permission to use it for this gift.

Now, if you know my work, you know it’s not pictorial!  So I had to teach myself how to do a lot of things for the first time!  I ordered a print of the painting, then traced lines around the major color areas on tracing paper, so it looked kind of like a paint-by-number project.  I took it to my local printer, who enlarged it for me.  This was my guide for cutting the applique shapes.  I dyed the background “sky” fabric, using a shaving cream technique I read about somewhere to get the water-color effect, yet careful placement of colors that I wanted.  I found a wonderful piece of McKenna Ryan ombre fabric in my stash that helped me greatly in achieving some shading in the bird’s head and some of the feathers.  The appliques were fused onto the background, then I zigzagged around the edges with monofilament thread.

I sent freezer paper-backed sheets of fabric to family member and friends, and had them write “Happy Birthday, David” notes with memories of him.  These were pieced together and used for the backing.  I quilted in the ditch of the applique shapes with monofilament, quilted “flame-y” and “feather-y” shapes with variegated thread in the fire and wings, and stitched a simple horizontal line fill in the sky.

The quilt was a hit! 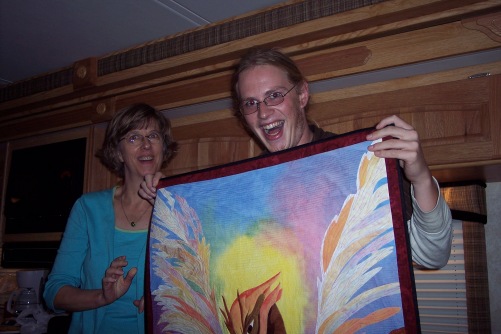 It, along with a table he made at a workshop in Arrowmont with his sister Annie and me, were his most prized prossessions.

Tragically, he was not able to escape the flames of addiction, and died almost two years ago.  Today would have been his twenty-eighth birthday.

Happy Birthday, Mark!  As with so many people who have lived in Texas, many of my sweet husband’s conversations sooner or later (usually sooner!) wind their way around to extolling the wonders of that state.  I made this quilted wall-hanging for him in 2001.

This was just about the first real quilt I made.  I’d made heirloom sampler quilts, but they were really comforters, with very little quilting.  And this was the first time I tried free-motion quilting!

Everything about the quilt is “Texas-y.”  The center star is a Lone Star, of course. 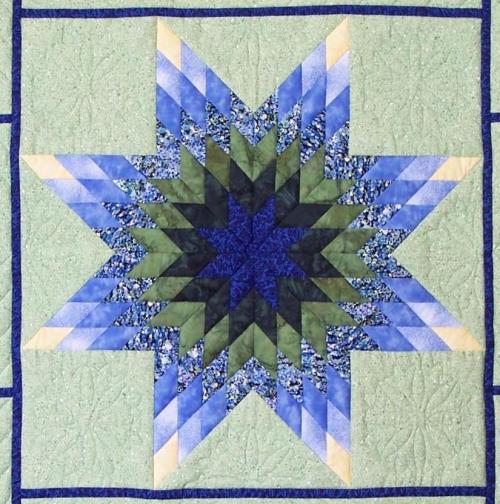 The fused, machine-appliqued bluebonnets are an adaptation of a design from Wildflower Album by Bea Oglesby, 2000, AQS.  I stitched around all the applique with a tiny blanket stitch, and stitched the little stems with a straight stitch.  Amazingly, I quilted in the ditch around all the applique with monofilament thread with the feed dogs up – not free-motion!  Why?  I was afraid of free motion!

The yellow roses, inspired by a Husqvarna Viking machine embroidery design, were adapted for machine applique. The Celtic designs on the quilt are original, and reflect Mark’s Celtic ancestry. I quilted in the ditch around all the Celtic designs with the feed dogs up, too.  I finally got my courage up and dropped those feed dogs and did a little free-motion tulip design in the large setting squares and triangles.  Sprinkled throughout the quilt, and used for the backing, is the Texas State Flower fabric by Northcott that was available then.  I think the batting is poly.

I’ve learned a lot about quilting since I made this.  And I love My Texas Star even more!

Today marks the one-year anniversary of my father’s death.  He was a good man, the kind of man every child should have for a father. He was as intelligent, hard-working, sensible, gentle, and honest as any person I’ve ever known.  He was born in 1925, the son of farmers.  And a farmer he was, til his last day, even though he could no longer drive a tractor or combine.  A man of the land.  I was always proud of him!

I went through a short time when I was in my early 20s during which I made needlepoint projects for my parents and my sister.  This was what I made Dad.  It wasn’t a kit – it was from an advertisement in a farm magazine!  I made it from the photo in the magazine.  It seemed so perfect for him – corn, wheat, soybeans, and a combine!  It’s still hanging in Mom’s kitchen.

This is a picture of Dad from 1938, when he was thirteen.  He is sitting on the fender of the tractor, and his older brother is driving.

This has always been one of my favorite pictures of him.  It’s from 1970, and it is so much how I remember him.  Notice the combine behind him, and the seed corn cap! 🙂 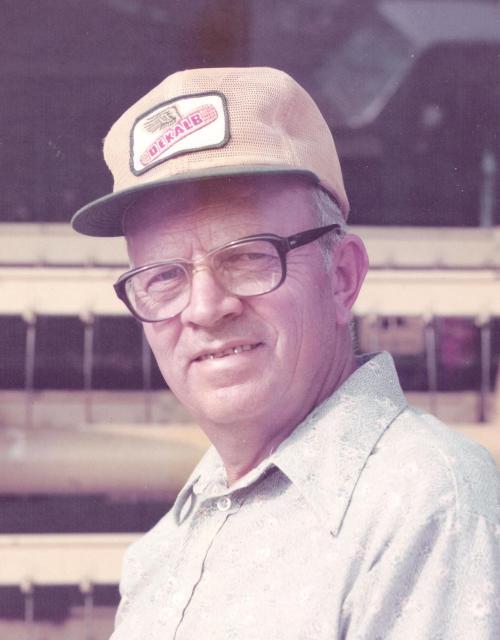 Finally, when I started quilting and was notified that my quilt (the first quilt I ever entered!) had won a prize at Houston, I asked if he and Mom wanted to go with me, in their motor home, to the show.  One of the first things he said at that first show was, “My mother would have loved this!”  He didn’t spend much time on the show floor – the long hours of standing were hard on his ever-painful back, and the noise of the crowds was difficult for him to handle with his hearing aids.  We went every year to Houston and Paducah, eighteen quilt shows in all.  This picture is the last quilt show we attended, Paducah in April 2013, where he saw me win Best Machine Workmanship.  I had always hoped that he would be able to see me win Best of Show someday, but that didn’t happen.  It doesn’t matter.  He was proud of me whether I won anything or not.  A lot of me comes from him, including the attitude of striving for excellence.  I love you, Dad! 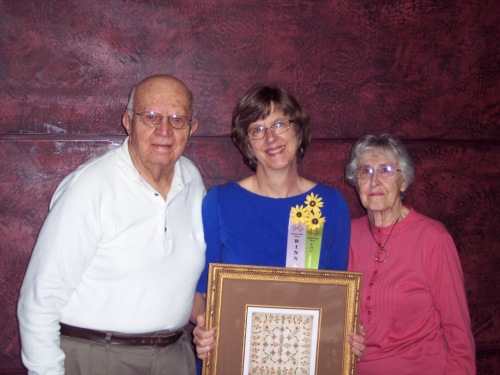 Moving ahead almost 50 years (hey, I never said this blog would be chronological!) I wanted to show you a variety of ways to use a single machine embroidery design.  This is a Zundt design, of course.  I first used it on a dress from my Rose pattern, which I taught at a couple of Martha Pullen schools in 2011. 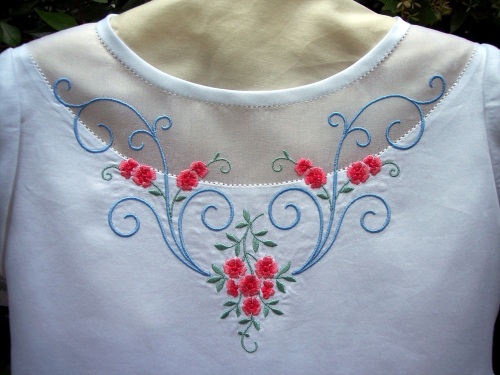 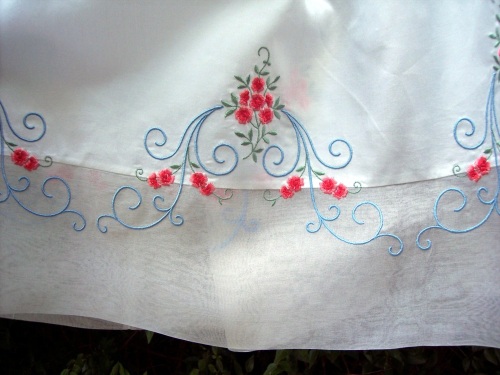 Then, switching to quilting, I used it (seventy-some times, I think) in Snow Flowers.  You can see the design here between the rows of quilted flowers.  It’s not a very good photo, the quilt isn’t finished, it’s white, not pink, but this is the best photo I have of the use of this design.

Here’s great photo, but you can only see a little of the scroll-y design. 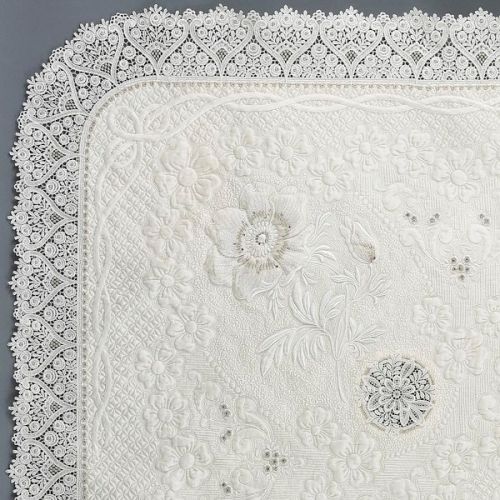 So the next time you look at embroidery designs, try to imagine all the ways they can be used!

I have been sewing since before I started elementary school!  So I thought I would start a blog about my stitching journey.  Sewing has taken me places and given me opportunities I never knew existed!  So as Julie Andrews sang, “Let’s start at the very beginning.”

While this little dress isn’t the first thing I made, it’s one of the first complete garments I made for myself.  I stitched this when I was nine years old.  You can tell by the fabric that I was very fashion-forward for 1964!

Look at the back – I put the zipper in by myself! 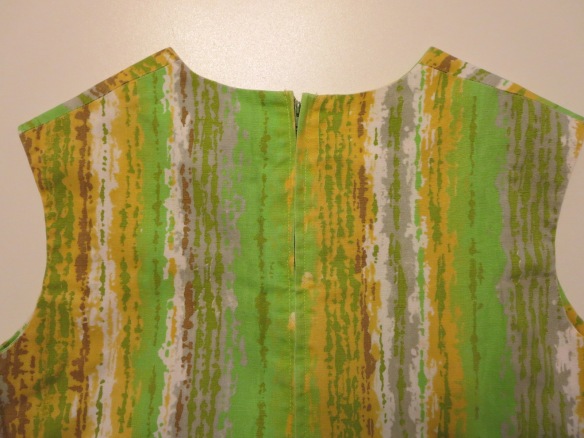 And the inside – pinked seams, carefully hand-stitched facings, and a hem with seam tape. 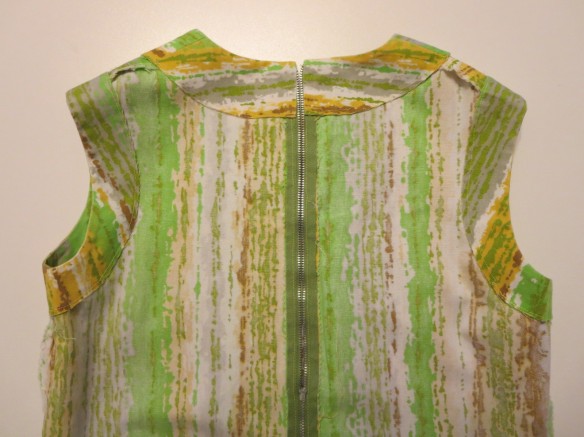 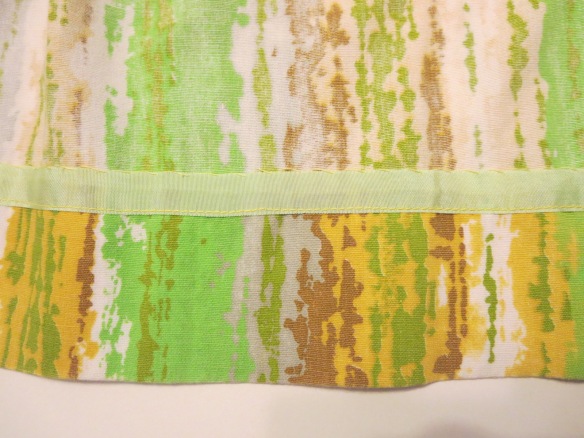 I can see why my Mom (who doesn’t save a lot of things) saved this!  I’m glad I have it. 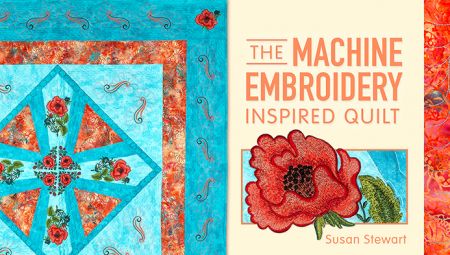