I think I made my first smocked garment from a Vogue (?) baby pattern, using iron-on dots to pleat the fabric.  When I discovered Sew Beautiful in the spring of 1989, I bought a pleater and made the most of the couple of years my children were willing to wear smocked brother/sister outfits!  Here is one of those sets:

This would have been taken about 24 or 25 years ago (ugh, am I really that old?!)  And except for the fact that the dress sleeves are longer and puffier than current fashion, these garments would work just as well now as then. 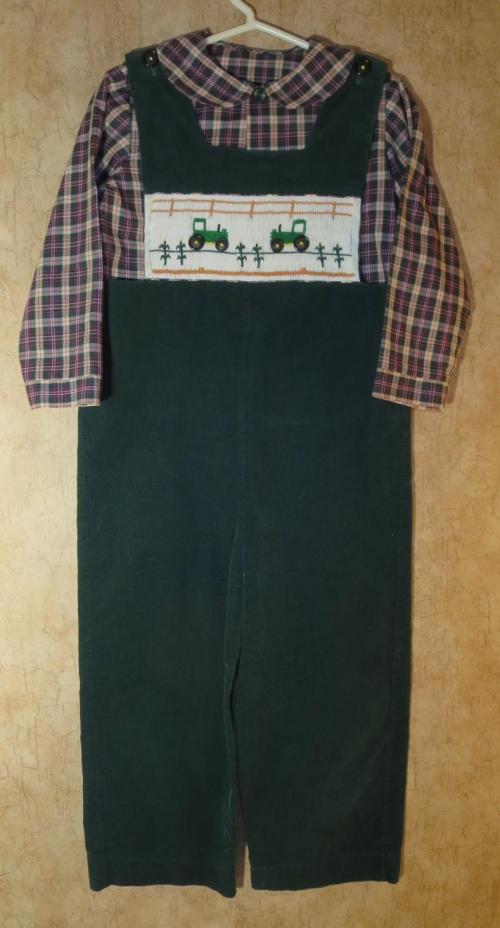 David’s outfit was made from dark green featherwale corduroy and a poly/cotton plaid.  The smocked insert was Imperial broadcloth.  The pattern was probably Children’s Corner “Jeffrey,” but I’m not sure.

I’m not sure what smocking plate I used.  If anyone recognizes it, let me know and I’ll give credit!  Or perhaps I didn’t use a plate at all, but made it up.  Anyway, David’s Paw, my Dad, was a farmer, so this was appropriate!  My smocking didn’t go all the way to the edges of the insert, but remember, this was one of my first pieces, and I’ve never been an expert smocker, anyway! 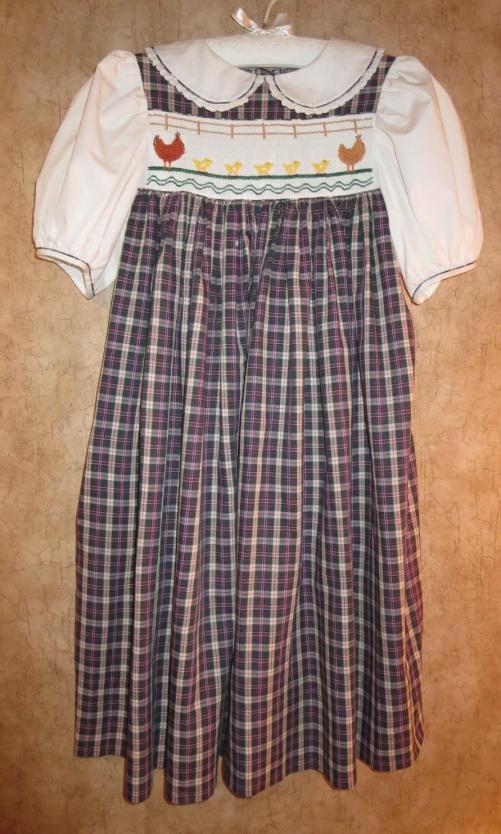 Annie’s dress was made from the same poly/cotton plaid and Imperial broadcloth, so it was very easy care.  She wore this to school, and then the dress was passed on to a couple of friends, so it’s seen a lot of wear.  In fact, there are a couple of small holes in the skirt, probably from getting caught in the chain of a swing.

The narrow eyelet trim around the collar doesn’t look like a Swiss trim, it was probably an inexpensive eyelet.  Remember, this was long before online shopping, and I lived in an area where heirloom supplies were completely unknown!  The chicks are “Barnyard Friends” by Creative Keepsakes.  Keep an eye on those little chicks… 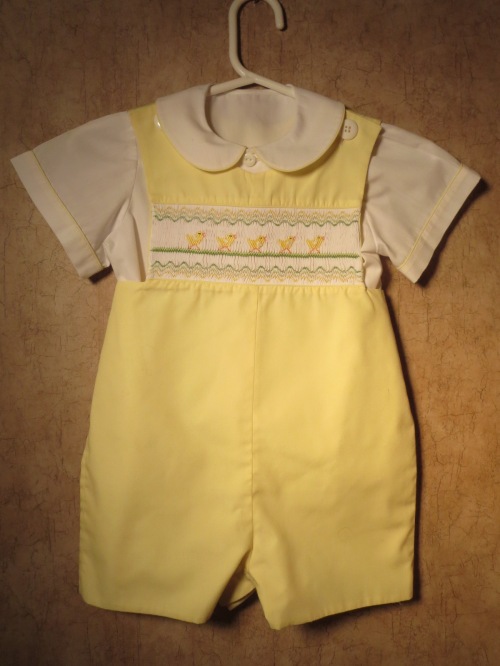 …because they showed up a little later in this romper I made for one of my nephews!

I’m sure I made up the rest of this smocking design.  And, I know, I have some puckers that I would be able to avoid now, but the romper is cute, anyway, and somewhere there’s a picture of my nephew wearing this.

Here’s the back of the romper, probably the Jeffrey pattern, too.  So cute!